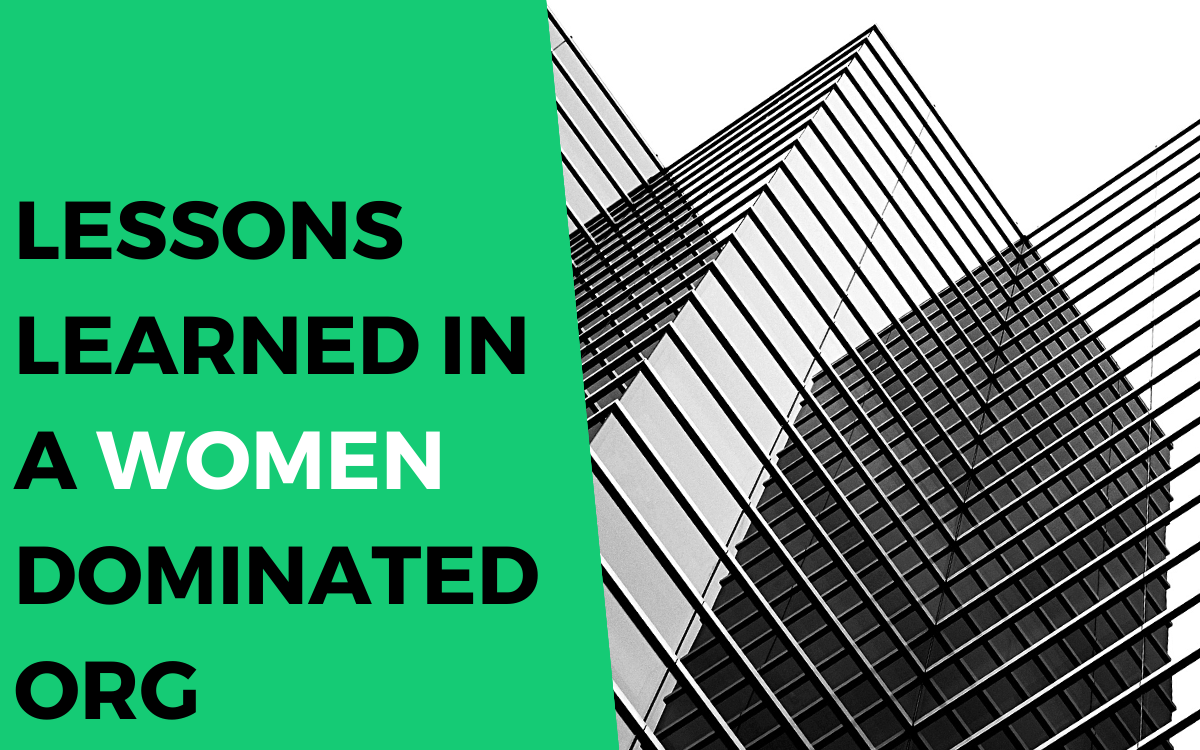 What I Learned Working in a Women Dominated Org

How did this happen?

A majority of the qualified candidates that apply are from women. And once a new team member joins our organization, women consistently outperform their male counterparts in talent, hard work, and consistency.

Why am I writing this?

Our marketing manager asked why we’re writing about this.

I find myself thinking a lot less about marketing tactics, and more and more about people, values, culture, systems and processes.

Part of me believes that women don’t feel as comfortable sharing the things in this article when women are outnumbered as heavily as they are in most tech orgs.

According to Statista; Facebook, Google and Microsoft are all between 62 – 68% male. 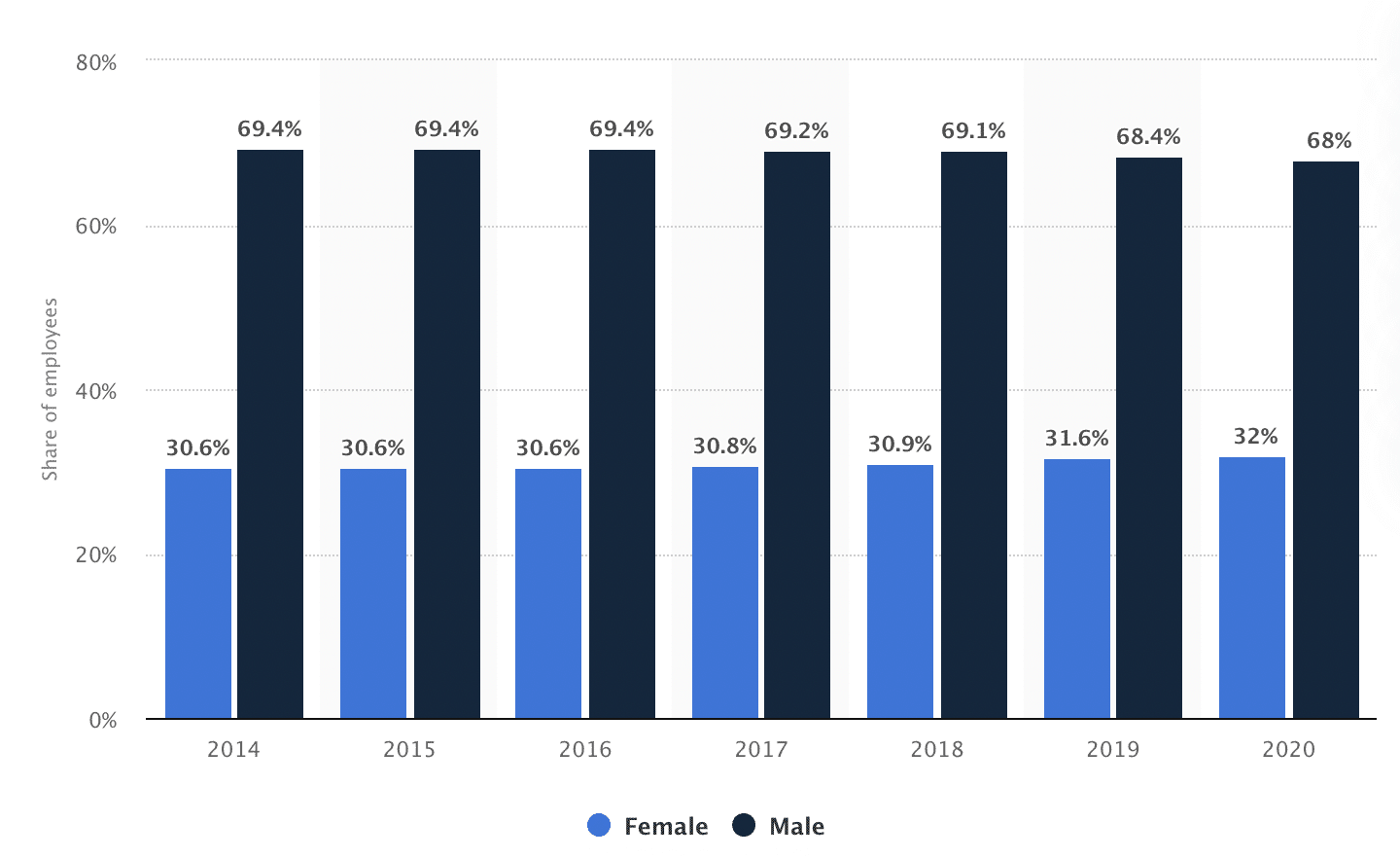 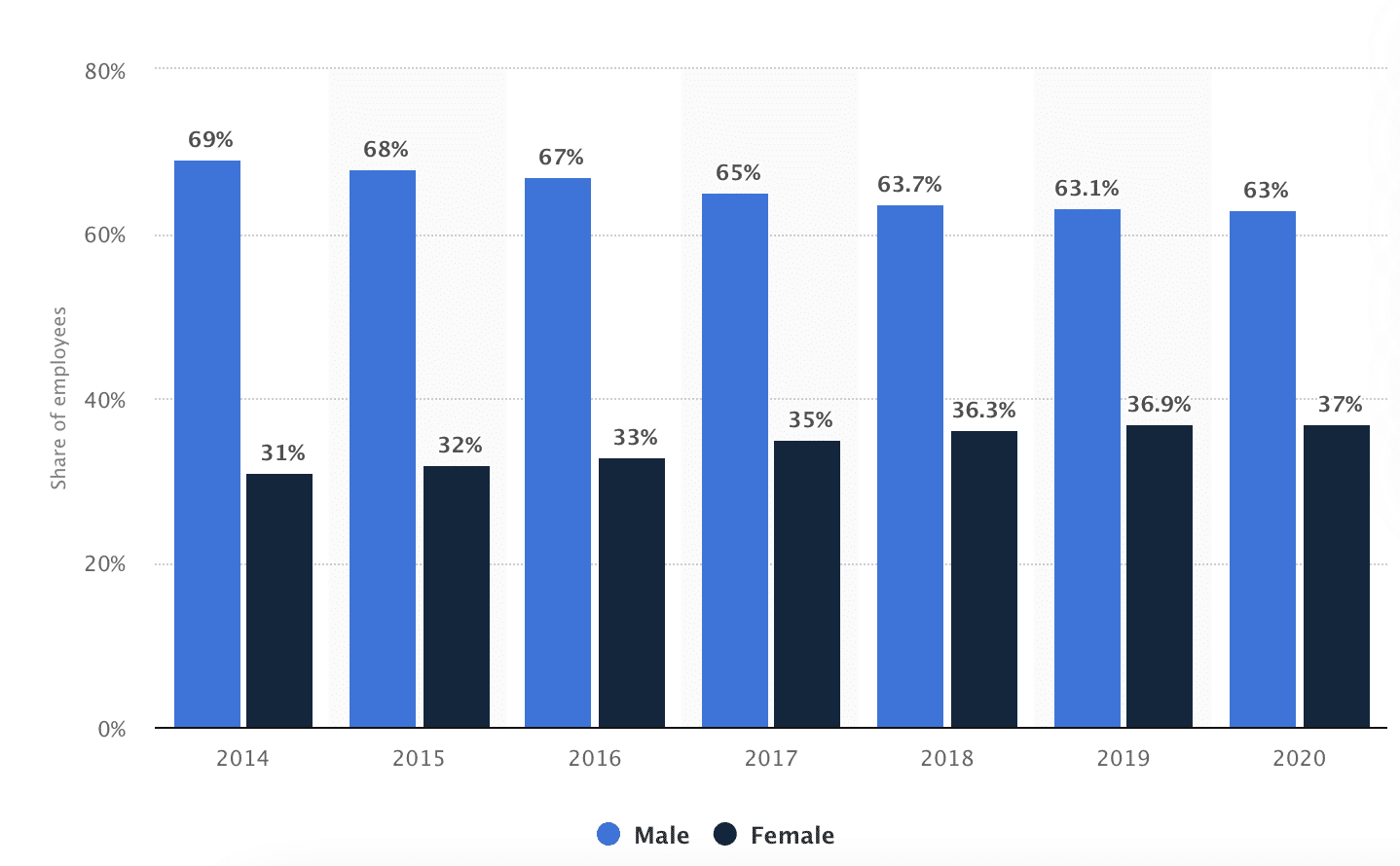 The reason I’m writing this is to educate all my internet bruhs’ working in, and running male dominated companies, so you don’t have to be 34 years old (like me) and not know what it’s like for 51% of people alive.

I’ve seen women in the industry rise in popularity, build giant emails lists, large audiences on LinkedIn and Facebook, speak at conferences, then completely disappear from the spotlight due to the negative impact their popularity has had on their mental well-being.

And the women in our organization struggle with the same problems. They stay away from the Facebook groups and LinkedIn discussions because they feel uncomfortable dealing with the majority of the online community.

What are the reasons?

Women cry because of work

The first time one of the staff admitted she had cried because of work I was devastated. Despite my best intentions, I had accidentally built a toxic work culture. How could this have happened? How did I screw up so bad?

I reached out to the only women who would judge me, but judge in secret, and not tell anyone how big of a monster I am – my mom and sister.

They weren’t surprised at all.

But not because of me.

Before I published this article, I reached out to Stephanie Solheim, the admin of the largest women in marketing community on the internet with 28,000 members.

“What you’re missing is that crying is a reaction to an emotion – stress, anxiety, fear, even being tired might be a reason to cry. Men react to those same exact emotions with aggression, hostility, raising their voice, and interrupting people. Our society has decided that aggression and yelling is an appropriate behavior in response to those emotions in the workplace, but crying is viewed as a sign of weakness.”

If you’re a woman in marketing, you need to check out the largest Women in Marketing community on the internet.

Women frequently work through pain that men would use PTO for

I get a stomach ache maybe once a quarter, and I’m taking PTO, every time. I get headaches a bit more frequently, and I’ll cancel all of my meetings, always.

My takeaway from the women I spoke to is they only feel normal one week per month. The other three weeks per month, they’re generally working through headaches, stomach aches and cramps.

If I’m in a meeting, and someone on my team clearly isn’t looking well, I’ll always ask if they’d like to cancel our meeting and rest.

The women on my team are incredibly talented, passionate and driven. They truly enjoy what they do and the impact they have. They also receive the most criticism for pursuing a career they find meaningful.

Their moms, their friends, their aunts, their grandmas, their acquaintances in casual conversation. Here are some actual comments women on our team have heard from other women:

“Every discussion remotely related to politics, advocacy or society at large quickly spins away from pleasant.”

I made a Facebook status soliciting opinions on a few words I was planning on using in the title of this blog post.

The conversation very quickly became uncomfortable, and had the potential to get a lot worse.

My opinion is that as a mid 30s white founder from Seattle, it’s very easy for me to be apolitical.

The system works great for me.

Borrowing a quote from a commenter on Hacker News,

“For some employees, they can’t get away from politics and societal issues because it affects them every day and their very existence has been politicized.”

Here are some stats that reflect that:

From the Public Religion Research Institute.

I also recognize I run a company with profit focused objectives.

We’re not immune to challenges experienced by BaseCamp.

I’ve watched relatively benign, work related conversions spiral out of control, completely consuming all of our organization’s bandwidth. I became absolutely sick of talking about, thinking about, responding to this never ending discussion.

Eventually we, as in management, shut it down. Things got objectively better, quickly.

I can easily imagine similar conversations happening again, but around a topic that is highly sensitive to the people in our org, and management’s attempt to shut down the conversation is perceived as hostile with lingering impact on culture.

As we grow, I think the chances only become more likely.

When I read Brian Armstrong’s statement on Coinbase’s decision to ban political discussion at work, I found myself nodding in agreement. 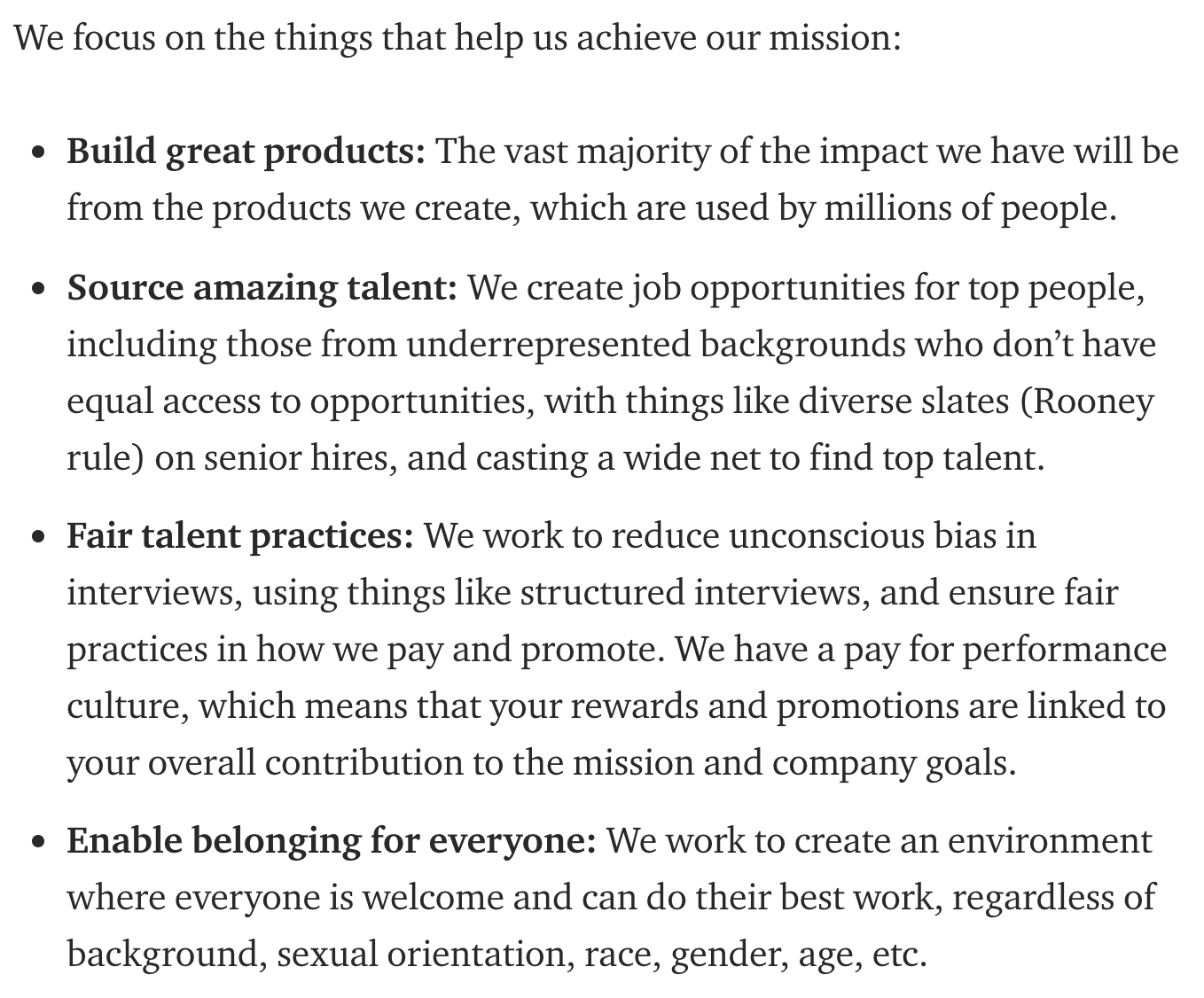 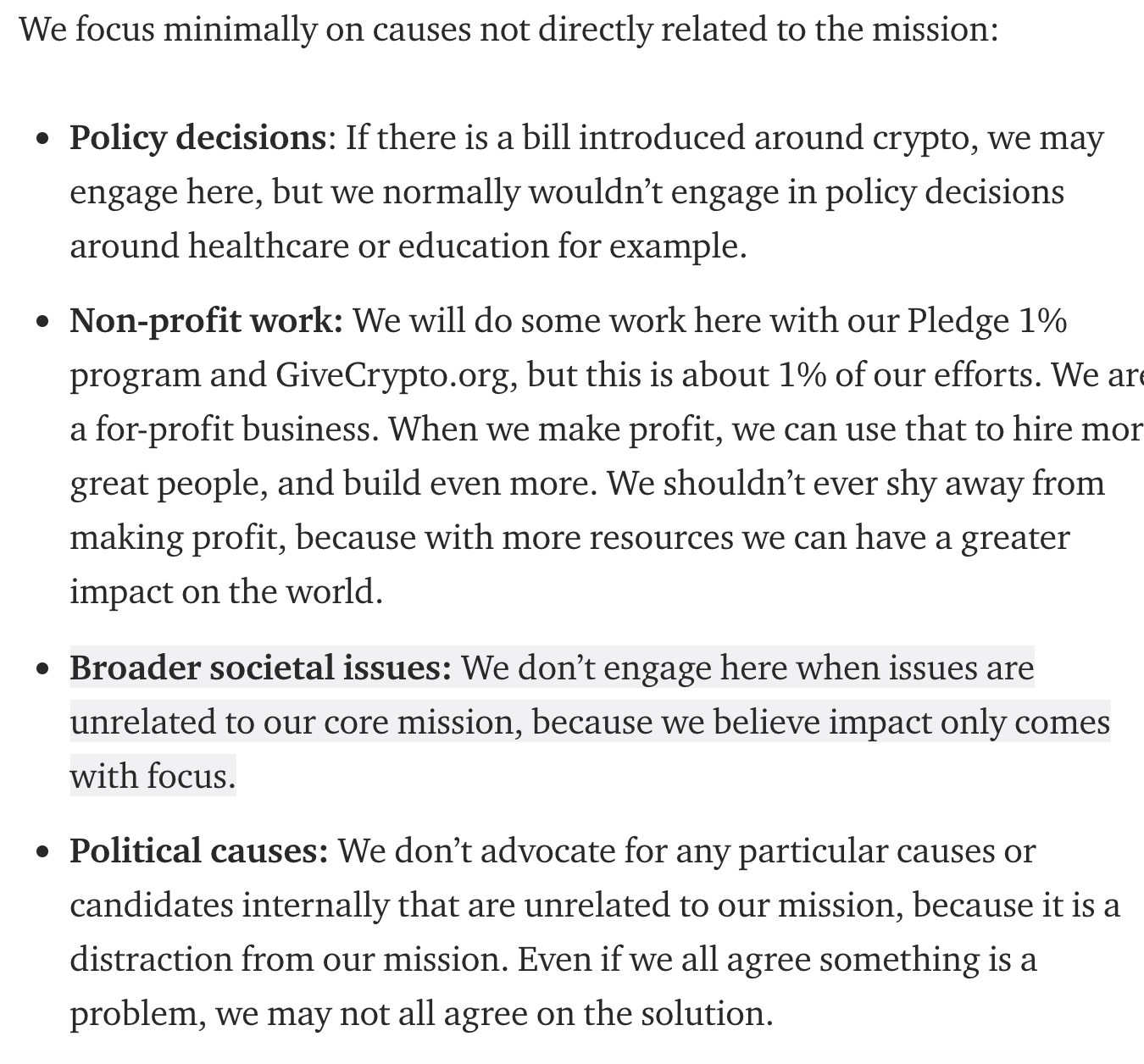 I don’t have an answer. What do you think?

None of us have ever done this before.

And we’re figuring it out in public.